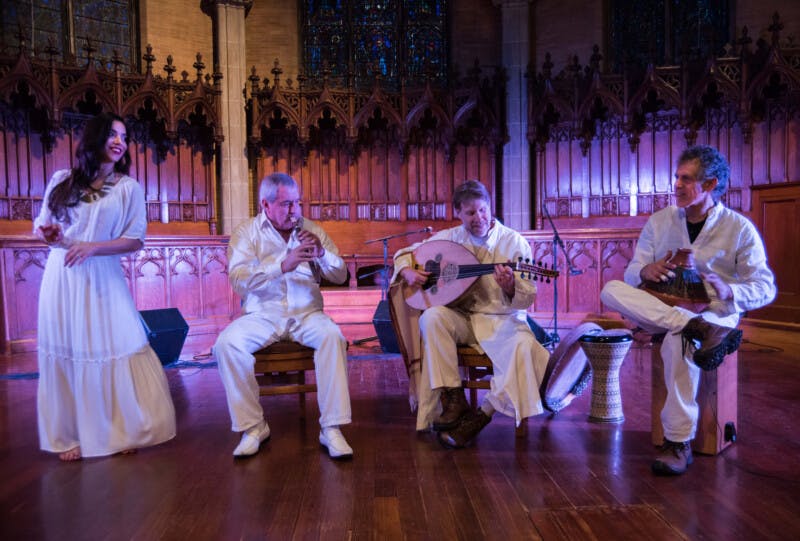 Formed in 1999, The Yuval Ron Ensemble endeavors to alleviate national, racial, religious and cultural divides by uniting the music and dance of the people of the Middle East into a unique mystical, spiritual and inspiring musical celebration. The ensemble includes Jewish, Christian and Muslim artists who have been actively involved in creating musical bridges between people of various faiths and ethnic groups worldwide. Led by Award winning composer Yuval Ron (music for Oscar winning film “West Bank Story”) the Ensemble has enjoyed overwhelming community support, was chosen to be featured in PBS “Holiday Celebration” TV specials and was honored with the Los Angeles Treasures Award and the Lincoln/Standing Bear Gold Medal from the City of Lincoln, NE in appreciation of its efforts for peace and justice worldwide. The Yuval Ron Ensemble Cd’s “ Under The Olive Tree,” “Tree of Life,” “Seeker of Truth” and “Unity of the Heart,” have become international favorites with world music lovers and has been featured on National Public Radio’s “Echoes” and “Hearts of Space” programs. The Yuval Ron Ensemble was in residencies at numerous schools such as Yale University, John Hopkins University, University of Chicago, UCLA, Seattle University and Middlebury College has performed numerous benefit concerts to support organizations that promote peace and help the disadvantaged.