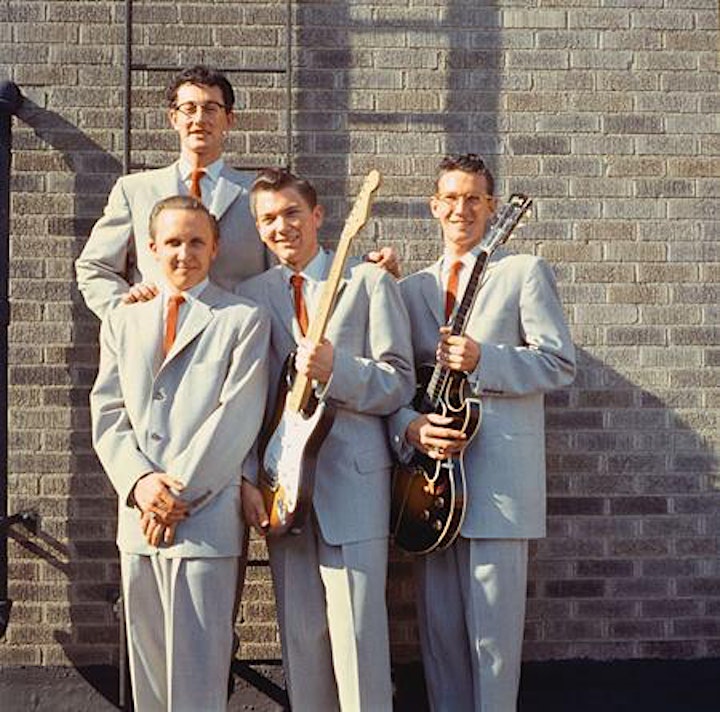 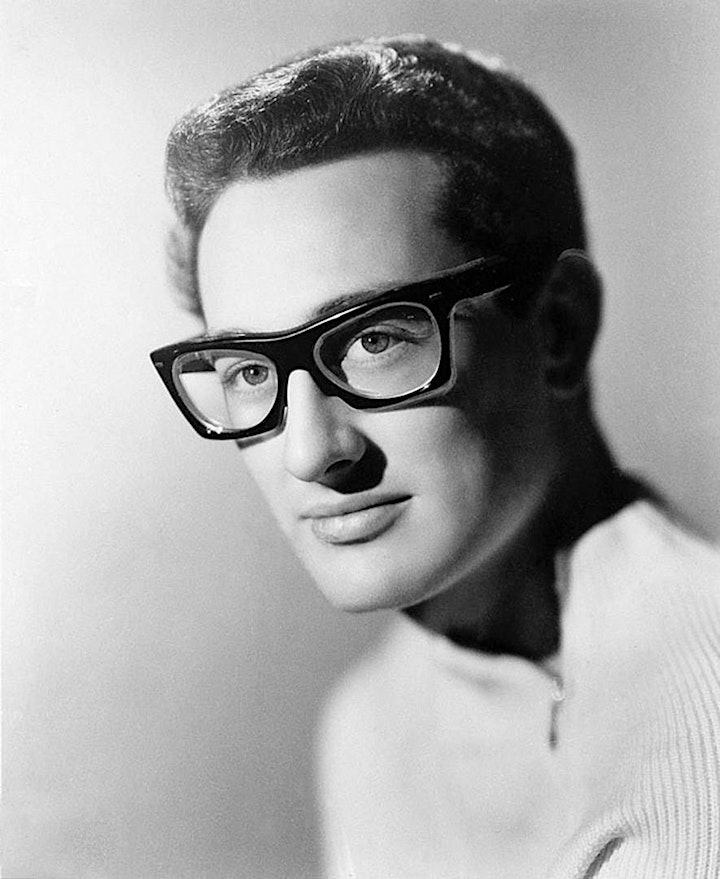 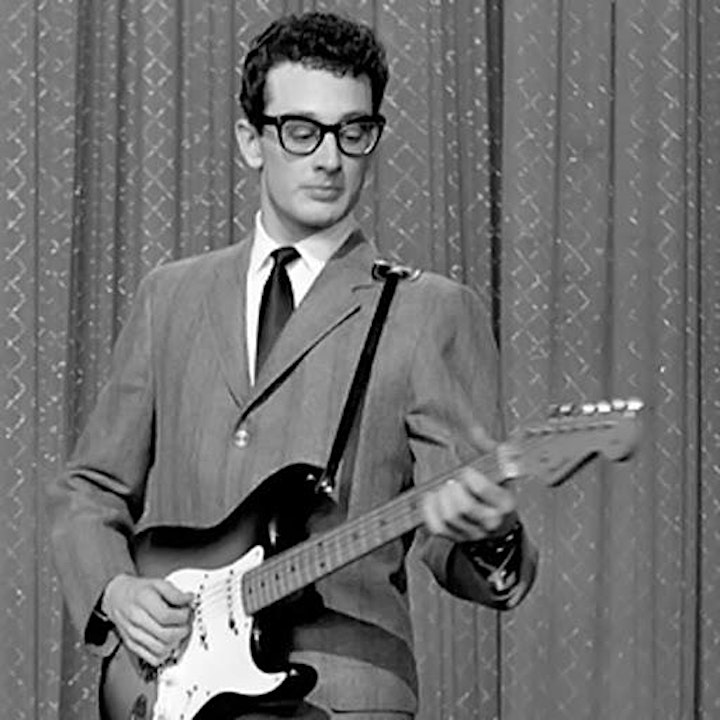 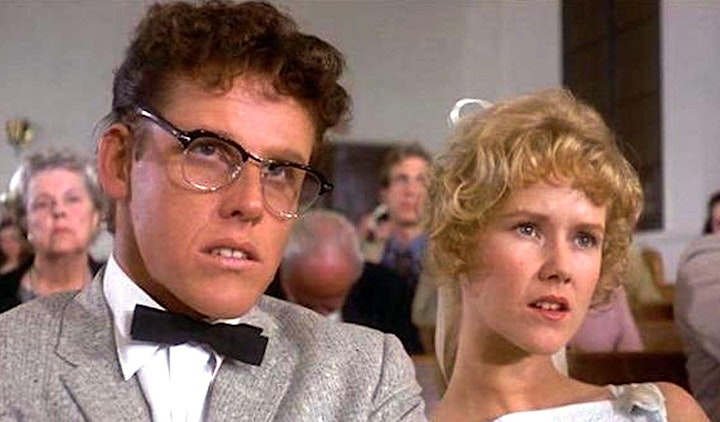 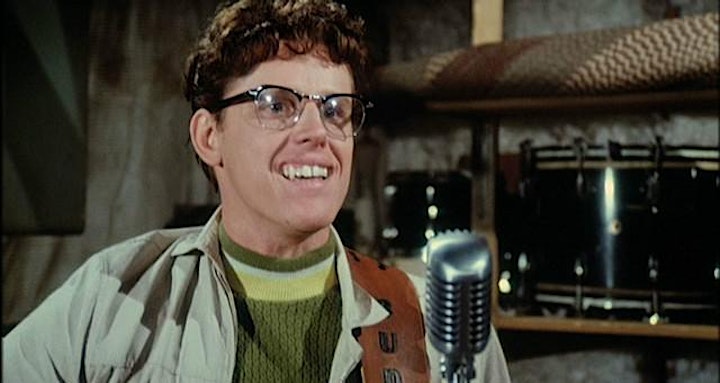 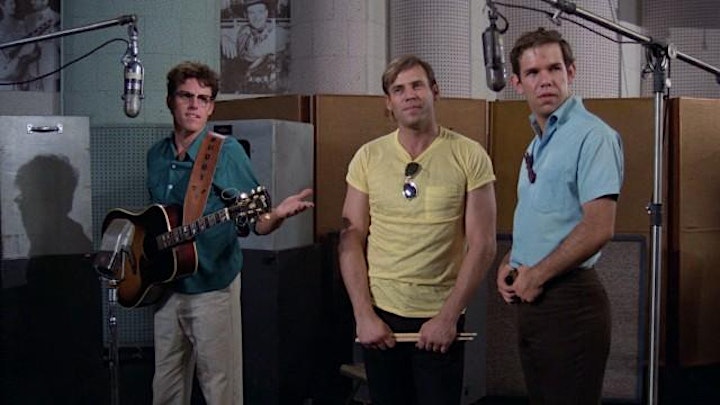 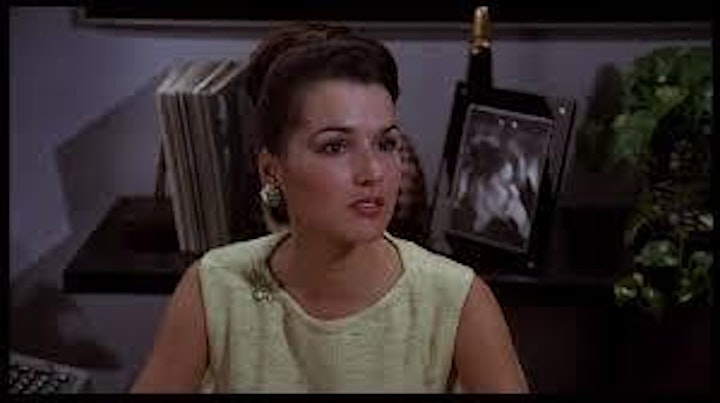 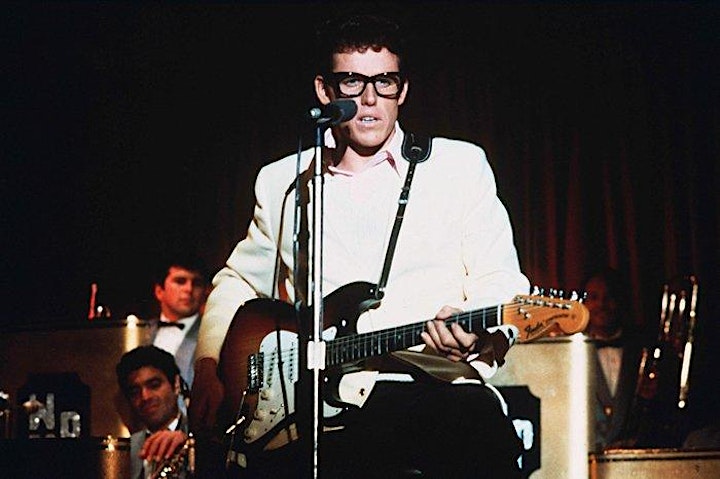 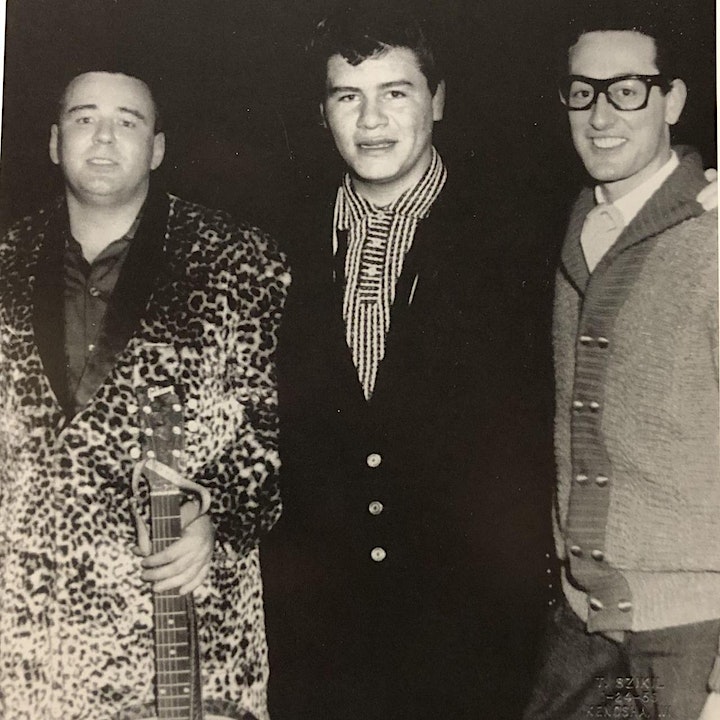 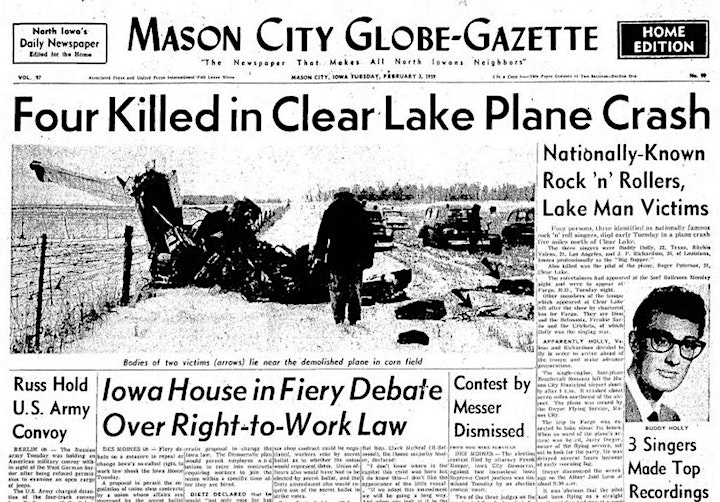 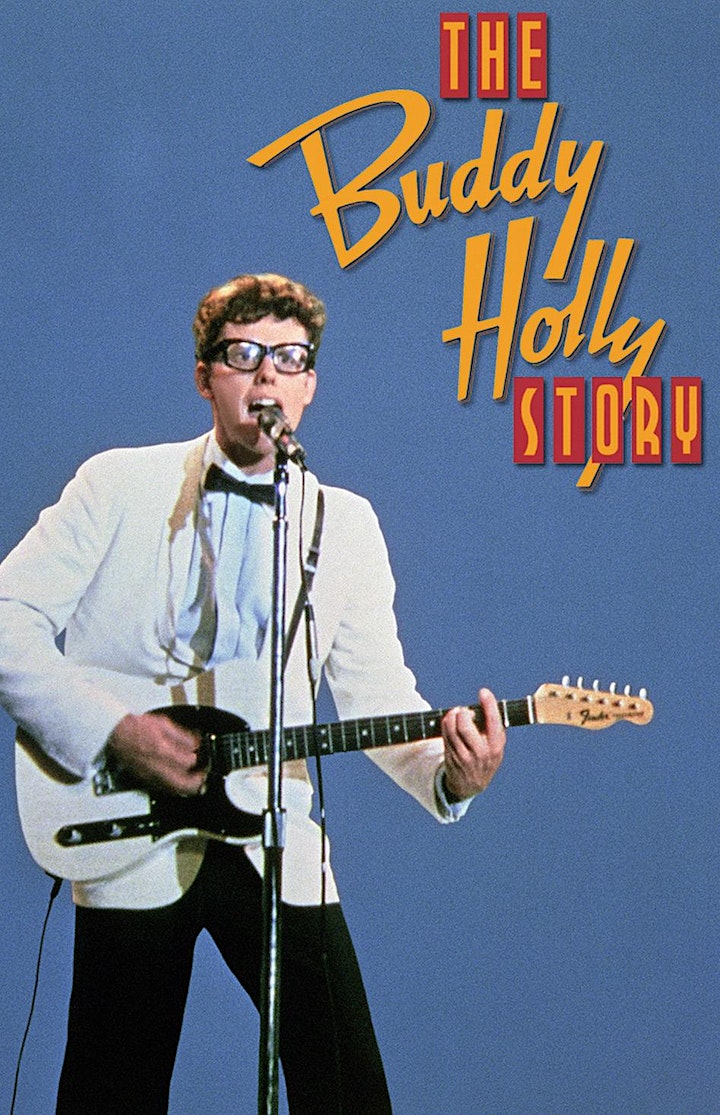 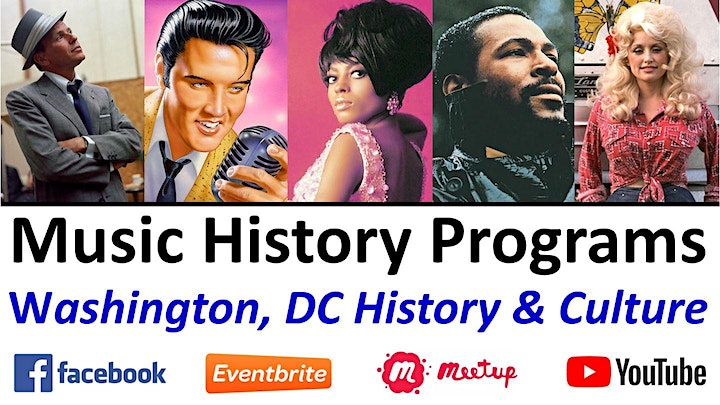 We invite you to join us for a film screening of “The Buddy Holly Story” – one of the greatest Rock & Roll films of all time.

Our program coincides with the 63rd anniversary of The Day the Music Died – the deaths of musicians Buddy Holly, Ritchie Valens and J.P. “The Big Bopper Richards,and pilot Roger Peterson, in a plane crash near Clear Lake, Iowa on February 3, 1959.

The first portion of our two-part music history livestream program will be a thirty-six-minute overview of Buddy Holly’s life and career, including music videos of his biggest hits, and a brief overview of “The Day the Music Died” plane crash.

We’ll also analyze and discuss the popular film The Buddy Holly Story – released in 1978 . The second portion of our music history program will be a full screening of the 114-minute film.

It was adapted by Robert Gittler from Buddy Holly: His Life and Music, the 1975 biography of Holly by John Goldrosen, and was directed by Steve Rash.

Charles Hardin Holley (September 7, 1936 – February 3, 1959), known professionally as Buddy Holly, was an American singer-songwriter who was a central and pioneering figure of mid-1950s rock and roll. He was born in Lubbock, Texas, to a musical family during the Great Depression, and learned to play guitar and sing alongside his siblings. His style was influenced by gospel music, country music, and rhythm and blues acts, which he performed in Lubbock with his friends from high school.

In 1953 he formed the group “Buddy and Bob” with his friend Bob Montgomery. In 1955, after opening for Elvis Presley, he decided to pursue a career in music. He opened for Presley three times that year; his band’s style shifted from country and western to entirely rock and roll.

Holly went to producer Norman Petty in Clovis, New Mexico, and recorded a demo of “That’ll Be the Day”, among other songs. Petty became the band’s manager and sent the demo to Brunswick Records, which released it as a single credited to “The Crickets”, which became the name of Holly’s band. In September 1957, as the band toured, “That’ll Be the Day” topped the US and UK singles charts. Its success was followed in October by another major hit, “Peggy Sue”.

During his short career, Holly wrote and recorded many songs. He is often regarded as the artist who defined the traditional rock-and-roll lineup of two guitars, bass, and drums. He was a major influence on later popular music artists, including Bob Dylan, The Beatles, The Rolling Stones, Eric Clapton, The Hollies (who named themselves in his honor), Elvis Costello, Marshall Crenshaw (who later played Holly), and Elton John. He was among the first artists inducted into the Rock and Roll Hall of Fame, in 1986. Rolling Stone magazine ranked him number 13 in its list of “100 Greatest Artists”.

The Day the Music Died. On February 3, 1959, American rock and roll musicians Buddy Holly, Ritchie Valens, and “The Big Bopper” J. P. Richardson were killed in a plane crash near Clear Lake, Iowa, together with pilot Roger Peterson. The event later became known as “The Day the Music Died” after singer-songwriter Don McLean referred to it as such in his 1971 song “American Pie”.

At the time, Holly and his band, consisting of Waylon Jennings, Tommy Allsup, and Carl Bunch, were playing on the “Winter Dance Party” tour across the Midwest. Rising artists Valens, Richardson, and Dion and the Belmonts had joined the tour as well. The long journeys between venues on board the cold, uncomfortable tour buses adversely affected the performers, with cases of flu and even frostbite.

After stopping at Clear Lake to perform, and frustrated by such conditions, Holly chose to charter a plane to reach their next venue in Moorhead, Minnesota. Richardson, suffering from flu, swapped places with Jennings, taking his seat on the plane, while Allsup lost his seat to Valens on a coin toss. Soon after takeoff, late at night and in poor, wintry weather conditions, the pilot lost control of the light aircraft, a Beechcraft Bonanza, which subsequently crashed into a cornfield, killing all four on board.

The event has since been mentioned in several songs and films. Various monuments have been erected at the crash site and in Clear Lake, where an annual memorial concert is also held at the Surf Ballroom, the venue that hosted the artists’ last performances. 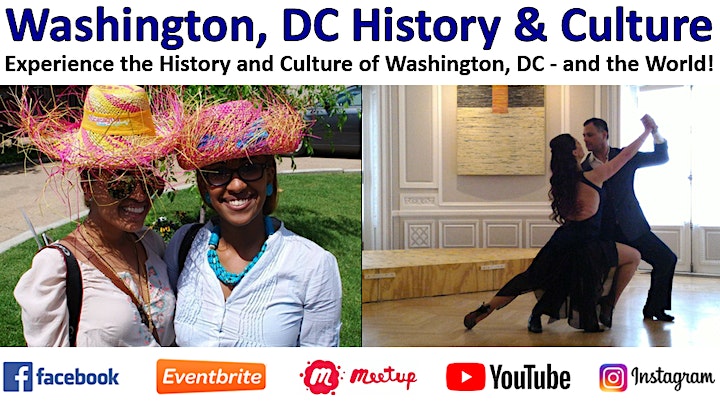 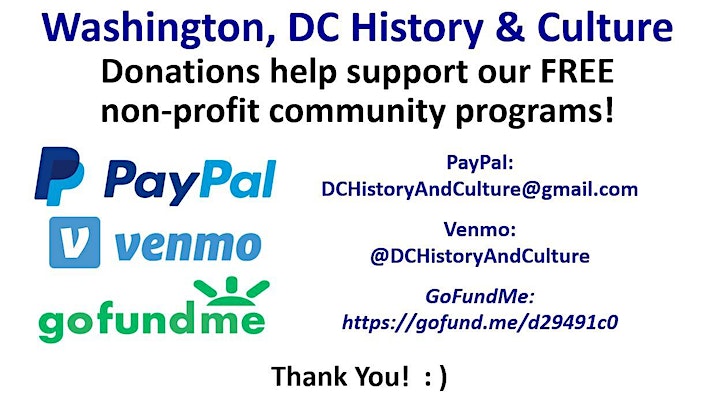