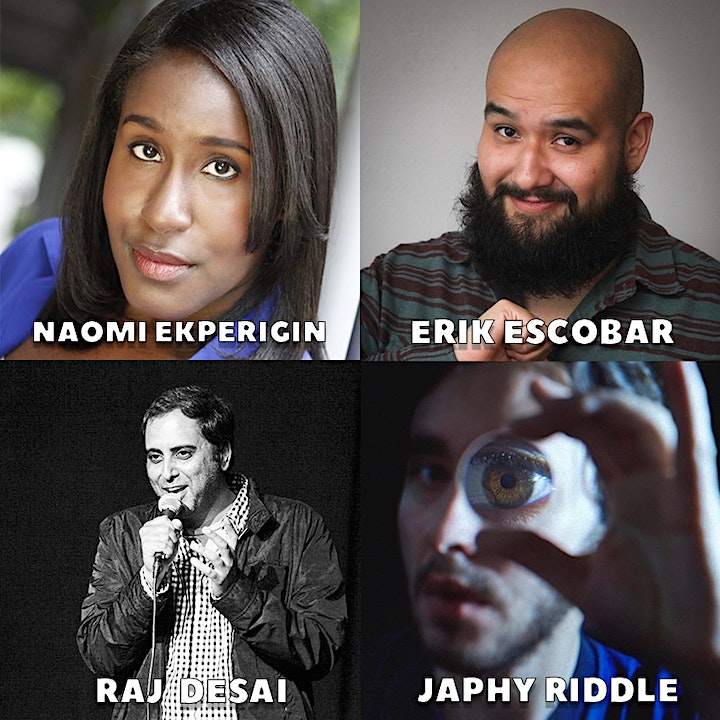 SPECIAL GUESTS FOR THE ZOOM EVENT:

Naomi Ekperigin is an actor, stand-up comedian and writer who has appeared on TruTV, VH1, MTV, FX, and HBO.﻿ Her Comedy Central Half Hour special premiered October 2016 and you can watch it now on cc.com. Naomi has written for Comedy Central’s “Broad City”, Hulu’s “Difficult People” and NBC’s “Great News”. In 2017, she was listed as one of “10 Comedians You Need to Know” by Rolling Stone. A regular on the hit podcast 2 Dope Queens, you can watch her on episode four of the 2 Dope Queens HBO special on HBOGO and HBONow. Go, now, watch!

Erik Escobar is a comedian who has performed all over the United States at clubs, colleges, and theatres independently, with the Almost Asian Comedy Tour, and opening for acts such as Rex Navarrete and Jerry Seinfeld. You can catch him on NBC’s Last Comic Standing, Buzzfeed, VH1, the upcoming feature film VHYes alongside Tim Robbins and Thomas Lennon, and he just released a TedTalk. Erik has also been featured on the popular podcast: The Viall Files and recently as Musical Bars on I Can See Your Voice on FOX! He holds a Masters in Fine Arts in Comedy Theory and Studies from Goddard College and resides in Los Angeles, CA.

Raj Desai writes for Sarah Silverman and has been on Comedy Central.

Japhy Riddle works professionally as a music video director/stop-motion animator in Portland, OR. All artistic mediums have always been fair game though.

***All donations will go to support the performers.***

Talkies is the Bay Area’s best unconventional, experimental, and multi-media live comedy event every second Friday at All Out Comedy Theater in Oakland, CA. At Talkies, comedians, writers, improvisers, and performers work outside of their regular routines to push the boundaries of comedy; PowerPoint presentations, characters, and off-stage antics are the order of the day.

Started in the basement of San Francisco’s Lost Weekend Video store, this monthly show has been an incubator for many unique comedy talents spreading their wings on weird flights of fancy. Past guest performers have included Aparna Nancherla, Brent Weinbach, Ron Lynch, Frankie Quinones, Myq Kaplan, Sad Vicious, Mary Mack, and Beth Lisick. The show is a regular feature of SF Sketchfest and almost always sells out.

TALKIES is produced by Nick Stargu, Aviva Siegel, George Chen and Will Scovill