Noam Chomsky on the Consequences of Capitalism 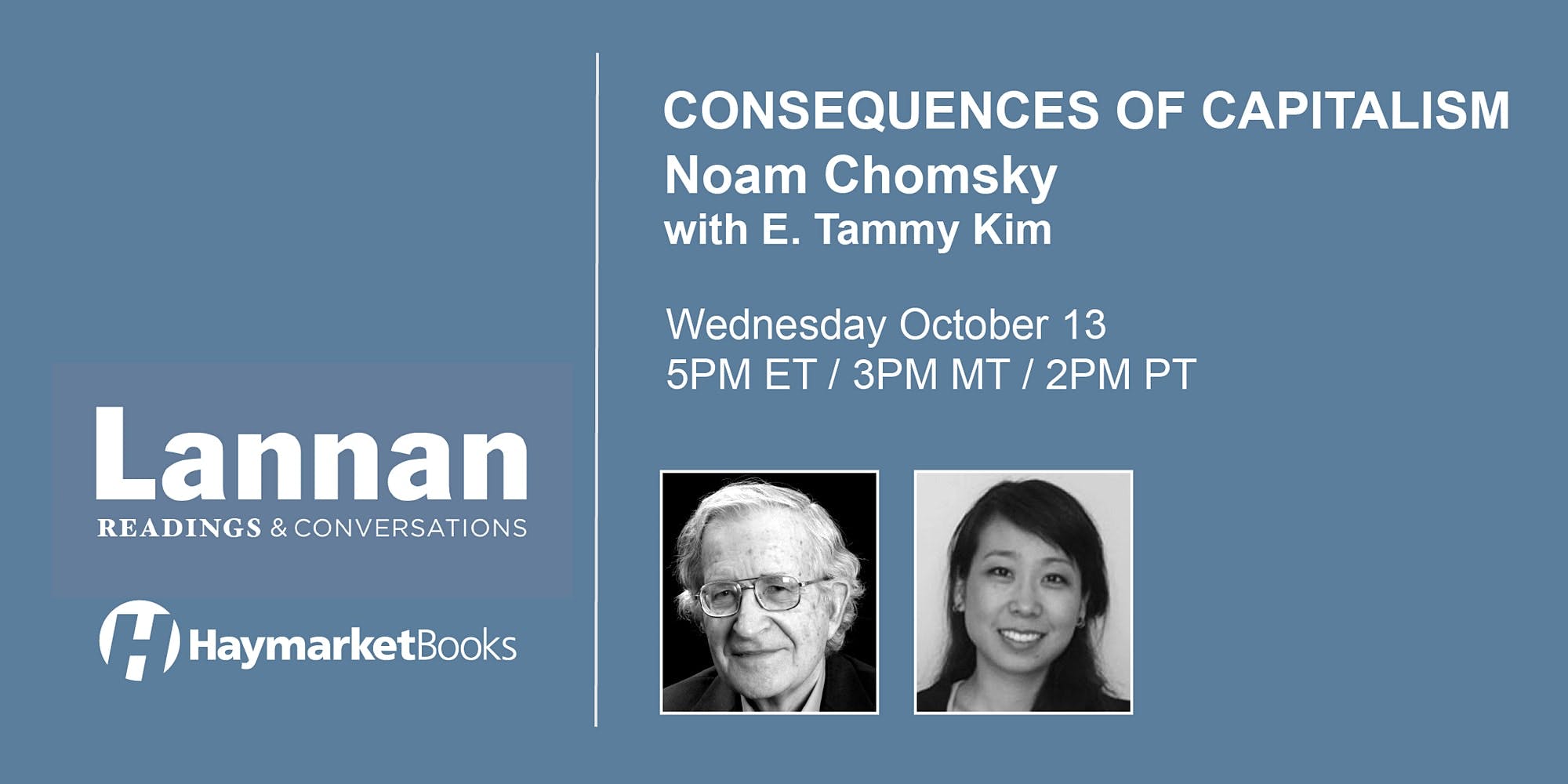 Noam Chomsky discusses the brutal realities laid bare by the COVID-19 pandemic—and the urgent need for an alternative to capitalism.

Covid-19 has revealed glaring failures and monstrous brutalities in the current capitalist system. It represents both a crisis and an opportunity. Everything depends on the actions that people take into their own hands.

Join Noam Chomsky for a conversation with E. Tammy Kim.

***Register through Eventbrite to receive a link to the video conference the day before the event. This event will also be recorded. Live captioning will be available via the webcast.***

Noam Chomsky is Institute Professor (emeritus) in the Department of Linguistics and Philosophy at the Massachusetts Institute of Technology and Laureate Professor of Linguistics and Agnese Nelms Haury Chair in the Program in Environment and Social Justice at the University of Arizona. He is the author of numerous best-selling political works, which have been translated into scores of countries worldwide. Among his most recent books are Who Rules the World?, Requiem for the American Dream, and What Kind of Creatures Are We? Haymarket has published twelve of his classic works with new introductions, as well as his books Masters of Mankind, Hopes and Prospects, Intervenciones, On Palestine and Gaza in Crisis (with Ilan Pappé and Frank Barat), Optimism Over Despair and The Precipice (with C. J. Polychroniou), and Consequences of Capitalism (with Marv Waterstone). In spring 2022, Haymarket is publishing a new compilation of Chomsky’s 1984–1996 interviews with David Barsamian, Chronicles of Dissent.

E. Tammy Kim is a freelance magazine reporter, a contributing opinion writer at The New York Times, and a co-host of the Time to Say Goodbye podcast, based in Brooklyn, New York. Her work has appeared in outlets including The New Yorker, The New York Times Magazine, The New York Review of Books, Columbia Journalism Review, and The Nation. She previously worked on the editorial staff of The New Yorker and as a national features writer at Al Jazeera America.

This event is a partnership between Lannan Foundation and Haymarket Books.

Lannan Foundation’s Readings & Conversations series features inspired writers of fiction, nonfiction, and poetry, as well as cultural freedom advocates with a social, political, and environmental justice focus. We are excited to offer these programs online to a global audience. Video and audio recordings of all events are available at lannan.org.

Haymarket Books is a radical, independent, nonprofit book publisher based in Chicago. Our mission is to publish books that contribute to struggles for social and economic justice. We strive to make our books a vibrant and organic part of social movements and the education and development of a critical, engaged, international left.

Noam Chomsky on the Consequences of Capitalism