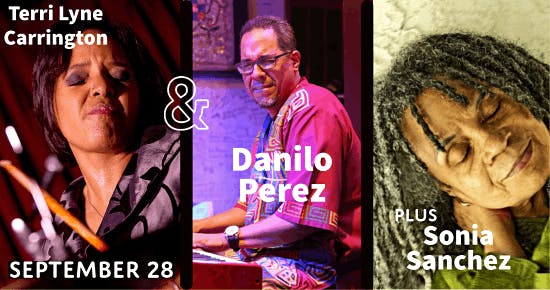 5-part Encore Series featuring our best concerts this year. On this night Terri Lyne Carrington is joined by Danilo Perez and Sonia Sanchez

From the mind of our Artistic Director Terri Lyne Carrington comes this Encore series of the Carr Center’s exciting virtual concert series, “dUOS & dUETS”, that paired up industry giants in ways you have never seen them paired before.

DANILO PEREZ: As a solo artist and as a collaborator with jazz giants from Dizzy Gillespie to Wayne Shorter for over three decades, Danilo Pérez has been lauded as one of the most creative forces in contemporary music

In 1993, Pérez turned his focus to his own ensembles and recording projects, releasing several albums as a leader, earning Grammy® and Latin Grammy® nominations. In 1996, under the Impulse label Pérez recorded, Panamonk, a tribute to Thelonious Monk which according to DownBeat magazine is one of the most important piano albums in the history of jazz.

While still in her 20’s, Ms. Carrington toured extensively with Wayne Shorter, Herbie Hancock and others. In 2011 she released the GRAMMY® Award winning album, The Mosaic Project, featuring a cast of all-star women, and in 2013 she released, Money Jungle: Provocative in Blue, which also earned a GRAMMY ® Award, establishing her as the first woman ever to win in the Best Jazz Instrumental Album category.

Her latest album, Waiting Game, with current band project, Social Science, was nominated for a 2021 GRAMMY® award and has been celebrated as one of the best jazz releases of 2019 by Rolling Stone, Downbeat, Boston Globe and Popmatters.

SONIA SANCHEZ: poet, activist, scholar – was a leading figure in the Black Arts Movement of the 1960’s and a pioneer in the development of Black Studies. She has authored over 16 books of poetry, short stories, critical essays, plays and works for children; including Homecoming, We a BaddDDD People, Love Poems, I’ve Been a Woman and Under A Soprano Sky.

Among her many awards and recognitions, Sanchez is a recipient of a National Endowment for the Arts, the National Book Award, the Robert Creeley Foundation Award, the Langston Hughes Poetry Award, The Robert Frost Medal and a Pew Fellowship in the Arts.

“dUOS & dUETS” is presented in partnership with JazzCorner. Register here for your free your direct access links.