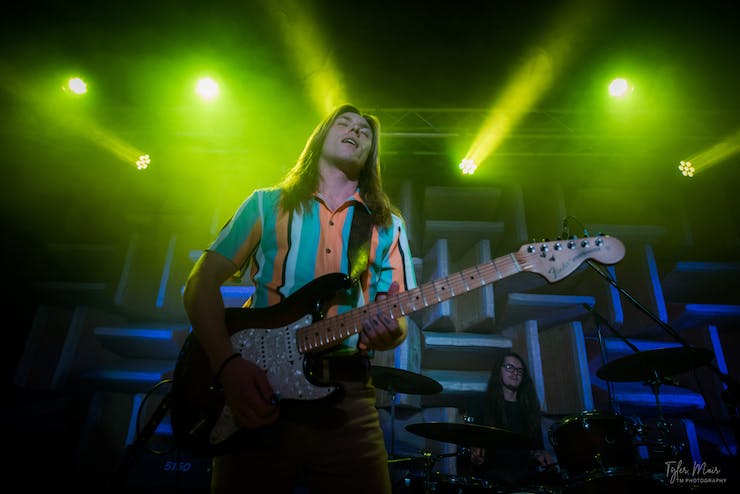 Dacota Muckey is a singer/songwriter/jam-band-frontman from Indianapolis, Indiana. He began playing and writing music at about 12 years old. Equipped with an acoustic guitar and a passion to live a life on stage, he immediately joined a local band and hasn’t stopped performing since. Some of his influences range from old school legends such as Pink Floyd and Jimi Hendrix to newer artists such as Trevor Hall, Alt-J, and Dermot Kennedy.

Through dealing with childhood trauma and molestation, coming to grips with his sexuality, and battling drug addiction that resulted in multiple life-threatening seizures, Dacota discovered his gift for music as a coping mechanism along his troubled path. Refusing to claim victimhood, he journeyed inward to reflect, heal, and openly share his story so others who’ve traveled similar paths don’t feel so alone.

From songs like “This Is the Music That Heals Your Soul” to “Life Is Incredible”, you can hear how Dacota has turned his darkness into brightly-shining insight through his soulful musical expression. His new project, set to be released in late 2020, helps listeners explore the darker side of life and fully embrace the spectrum of human experience. His vocals are dynamic with a bit of rasp, inspiring one music critic to declare, “when Dacota Muckey sings you can hear a bit of pain being released.” This accounts for the way his voice grips those who hear it, plunging them into the depth of self that gave rise to who Dacota is today.

With a natural propensity for writing, guitar playing, looping, and singing, Dacota combines his talents with keys, sax, drums, and bass to breath life and vitality into the music. This is why he aligned himself with four talented musicians to create “Dacota Muckey and The Trip”. The brotherhood seen on stage is one of the reasons why the band has steadily created buzz in wide circles of music lovers from all walks of life. Consistently referred to as an “up-and-coming act with no sign of slowing,” Dacota Muckey & The Trip rise to new heights and gain new fans with every show they play.
Since 2016, the band has released multiple projects including Gypsy, This Is the Music That Heals Your Soul, and Problems in a Song Parts 1 and 2. Throughout their burgeoning career they’ve shared the stage with Grammy Award Winner Blues Traveler, Andrew McMahon in the Wilderness, Laith Al Saadi of NBC’s The Voice, Matisyahu, Wookiefoot, and many others. They’ve played music festivals across the US including Bonnaroo, Shang Ri La, Werk Out, Thrive Fest Hawaii, and more.

With the recent purchase of an RV and a fire underneath him, Dacota has assembled a team of music industry professionals to help guide the band further than ever before. As the live music industry reopens and musicians hit the stage once again, you can expect to see “Dacota Muckey & The Trip” in your city soon.